Network effects drive over 70% of the value of technology-based companies … time to make Metcalfe’s Law work for you!

We all know about Moore’s Law.

The theory dates back to 1965 yet has been proved correct for five decades. Back in 1965, co-founder of chip giant Intel, Gordon Moore, made an observation that transistors were doubling in size every two years. Or put another, processing power doubles every two years. The period is often quoted as 18 months because Moore’s Intel colleague David House, predicted that chip performance would double even faster though a combination of the effect of more transistors and the transistors being faster.

However the rate of progress could be slowing down. According to a recent report from the International Technology Roadmap for Semiconductors (ITRS) transistors could get to a point where they could shrink no further by as soon as 2021. The companies argue that, by that time, it will be no longer economically viable to make them smaller, finally putting an end to Moore’s Law.

In 1960, Robert Metcalfe, founder of 3Com developed a model to demonstrate the power of communication devices, initially focused on phones and fax machines. Later he extended the concept to include the internet, and the connection between users and content in everything from social media to sports fans. Metcalfe’s Law states that the value of a network is proportional to the square of participants. Or put simply, every time you connect another person into a network, and therefore able to make many more connections, the impact is multiplied, and becomes exponential.

This is not about the technology itself, it is about how the technology enables networks to work – how they enable people to connect with each other, to collaborate and influence, to build mutual affinity and trust. Communities emerge, particularly relevant in what we call the sharing economy, and where the power of influence is the primary source of sales. Movements are a step even further in making networks work, giving them purpose, values and momentum. This might sound obvious. But think how many retailers do nothing to connect their consumers, particularly those with similar interests. Even telecom brands, with billions of users, do almost nothing to add value beyond the basic connections it provides.

In 2015, three Chinese academics – Zhang, Liu and Xu – tested Metcalfe’s Law on  data from Tencent, China’s largest social network company, and Facebook. Their work showed that Metcalfe’s law held for both, despite the difference in audience between the two sites – Facebook serving a worldwide audience and Tencent serving only Chinese users. The Metcalfe’s functions of the two sites given in the paper were

NFX is a consulting firm dedicated to unlocking network effects. Here is an extract from its article on capturing the benefits:

The Big 5 — Apple, Google, Microsoft, Facebook and Amazon — are hitting all time high valuations. Airbnb is worth more than Hilton in the private market. Uber is worth more than GM. Spotify and Dropbox IPOed in 2018, with Slack and Didi Chuxing on an IPO track

It’s fitting they should all be mentioned in the same breath, because other than Amazon, their business DNA is amazingly similar. They are all network effect businesses. And it turns out that most of the outsized returns of companies since 1994 have used network effects.

If you know the playbook, you shouldn’t be shocked at these companies’ rapid growth. But it’s surprising how few people know the network effects playbook. Many still confuse it with viral effects. Many know it’s important, but don’t know what it means. 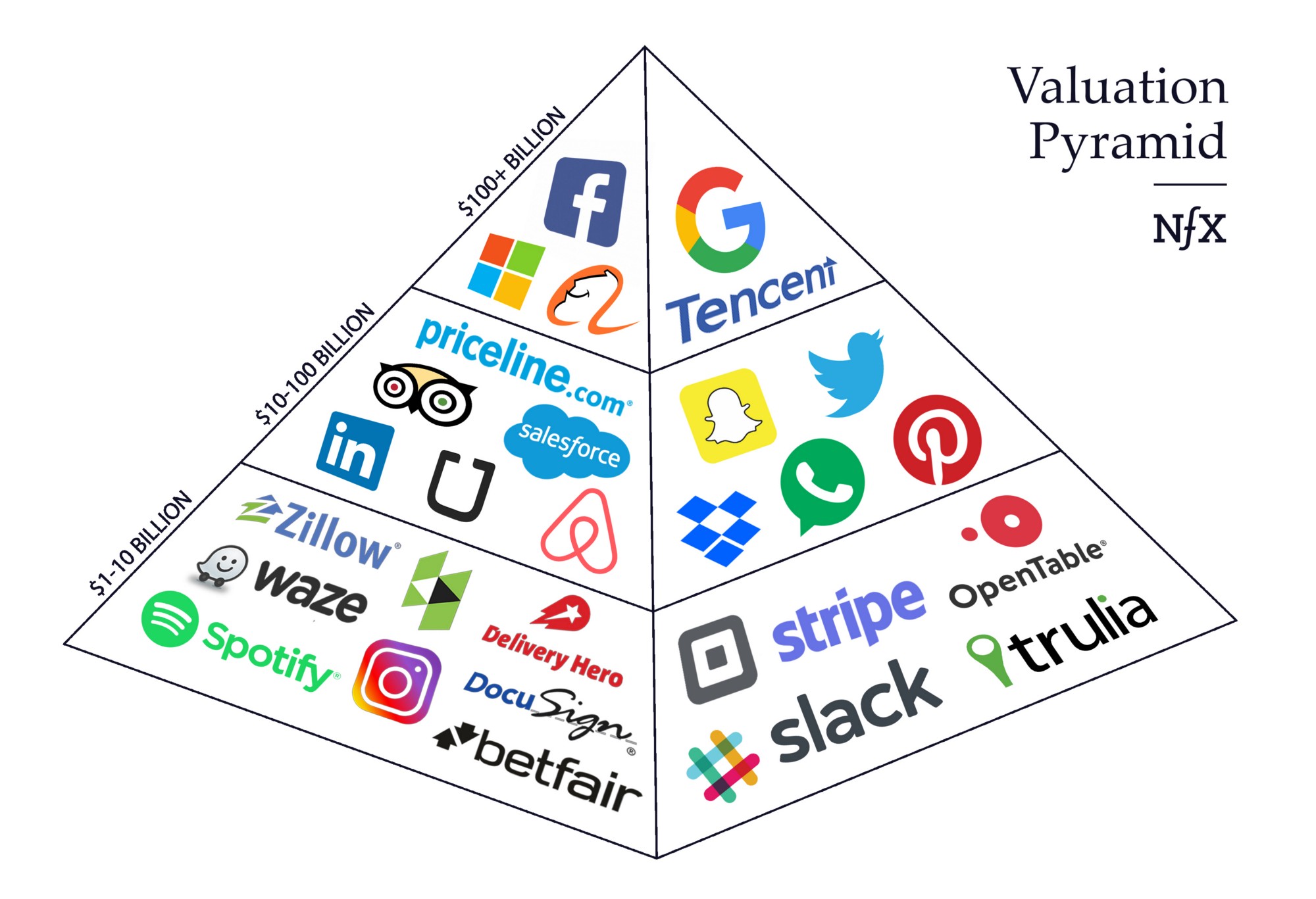 We did a study of the digital companies that were founded since the Internet was widely available in 1994 and that went on to become worth more than a $1 billion. 336 companies between 1994 and 2017 met this criteria.

By looking at each of the companies’ business models and comparing them to our list of 13 known network effects, we estimate 35 percent of those companies had network effects at their core. They were, however, typically much more valuable than companies without network effects so they added up to 68% of the total value in our spreadsheet.

In other words, companies that leverage network effects have asymmetric upside. They punch above their weight. They are the Davids that beat the Goliaths, and then become the Goliaths.

The other 65% of $1B+ companies used other defensibilities to create their value— namely embedding, scale and brand. These are good approaches, and created 219 $1B+ companies. 65% of the total. But those companies’ valuations typically top out in the $1-$2B range, leading to the results of this study.

Network effects are the most important driver of tech-enabled value.

It turns out that having a network effect is the single most predictable attribute of the highest value technology companies — other than perhaps “having a great CEO.”

And yet surprisingly, only 20 percent of the business plans we came across before starting NFX had network effects in them.

We believe that most founders fail to design network effects into their businesses because they don’t understand them well enough. And not understanding them, they don’t build them in from the beginning.

It’s sad to watch, because just as the Big Five are now consolidating their dominant threat to startups, and just as startups have lost the favorable winds of the Internet and mobile tech shifts, most founders are missing a key ingredient they will need to have a dog in the fight.

Unless founders wise up to the importance and discipline of network effects, the scales will be heavily tipped in favor of those who have.

If Your Startup Doesn’t Have Network Effects, You Need to Rethink Your Strategy.

Given their importance, it’s surprising there are only a few places to learn about network effects. We typically send people to HBS, Platformed, our thoughts on network effects and taxonomywith A16Z, NFX Essays, and other academic sources.

Network effects will increase in importance because the new platforms — and the re-invented verticals — are being born networked:

Understanding the principles of network effects and applying them to new companies today should produce the same or greater defensibility and value-creation advantages that we saw in post-1994 companies, particularly because there are now over 3B people networked to the Internet. If I have to design an AI company with or without network effects, I’ll take the one with network effects every time.

When you’re creating your digital business, architect your product to allow users to participate in value creation. Let their use of the product add value to the other users. Let customer 2 add value to customer 1. This makes the company defensible because competitors have a hard time adding as much value to users once you get ahead, and defensibility creates value.

If history tells us anything, the next SnapChat, Airbnb, and Uber will be created in the next twenty-four months. While the next billion dollar startup won’t look just like those companies on the outside, it’s a good bet that they will have network effects on the inside.