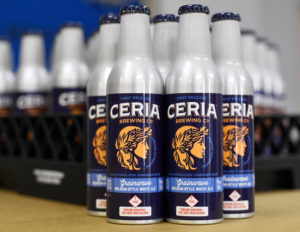 After months of chatter, a non-alcoholic beer promising a different kind of buzz is launched this week, according to the Denver Post.

The nonalcoholic beer, going for $7.95 per 10-ounce bottle, will deliver 5 milligrams of THC to the drinker’s system, about half the amount of many standard edible servings. The aim is to provide a high that is pleasant, relaxing and mellow enough to be enjoyed socially as well as recreationally.

“You should feel good but you won’t get too stoned,” Ceria co-founder and brewmaster Keith Villa said. “What better way to enjoy a Broncos game, especially when they’re losing, than to have a couple of these and feel good?”

Villa is known for making a different Belgian white ale. He created Blue Moon, which put him on the brewing map in 1995. The brewmaster retired from Molson Coors earlier this year, and a short time later he and his wife, Jodi Villa, founded Ceria in their hometown of Arvada.

“We want to remove the stigma around cannabis,” Villa said. “There are still a lot of people who won’t go into a dispensary. This breaks down stigma. We truly believe it will change the industry.”

Grainwave is brewed as a normal beer, and then the alcohol is removed. That’s why its label calls it “de-alcoholized cannabis beer.” Villa formulated his beer with help from Evergreen-based hemp research firm ebbu. The folks at ebbu helped Ceria connect with Keef Brands, makers of Keef Cola, Bubba Kush Root Beer and other infused sodas.

Its products have been available on dispensary shelves since before legalized sales began in 2014. Keef is providing the cannabis extract that spikes Villa’s beer, as well as bottling and distributing the product.

Ceria’s profile as something to be shared in a social setting appealed to Keef CEO Erik Knutson.

“Where you’re looking for a social experience, you don’t sit down and break up a brownie into 20 pieces,” Knutson said. “It’s definitely a cool alternative for people who are maybe at a point in their life where they don’t want to drink alcohol anymore.”

The Green Solution prides itself on carrying new and unique products, said Casey Efting, the chain’s retail manager for Colorado. He files Ceria under “revolutionary.”

Colorado has long been home to a vibrant brewing culture, as Villa can attest. And it was the first state to allow recreational marijuana sales. It seems only natural the two should meet. But federal law prohibits infusing alcoholic products with THC, leaving two options: Infuse beer with another nonpsychoactive component of cannabis, or make a nonalcoholic beer.

“This is something that even we have looked at in the past. How do we crack that code? How do we bring something to market that doesn’t have alcohol in it?” Efting said. “I think it’s going to be very popular.”

Ceria has two other beers on deck: an American light lager and an India Pale Ale. The lager will pack less of a THC punch, 2.5 milligrams per bottle. The IPA will be more potent, with 10 milligrams in each.

On the opposite side of the metro, in Aurora, there is a brewery making an infused beer on the other end of the spectrum.

Dad and Dude’s Breweria this summer relaunched its cannabidiol, or CBD, infused beer. CBD, lauded in holistic circles for its relaxing and anti-inflammatory effects, is available in a variety of products these days, but when Dad and Dude’s started selling beer made with it in 2017 the feds cracked down.

This July, the Breweria started up again, calling the beer George Washington’s Secret Stash in honor of the first U.S. president’s practice of growing hemp. It was a gamble, company president and co-founder Mason Hembree admits, but no federal agencies have come knocking. And with a farm bill that legalizes hemp awaiting President Donald Trump’s signature, he doesn’t expect they will. The IPA is available in six packs and on tap when Dad and Dude can keep it in stock.

“There are a lot of people going for it,” Hembree said.