Do you believe in unicorns? The $1 billion start-ups have become giants, and have spread across the world

A unicorn is a privately held startup company valued at over $1 billion. The term was coined in 2013 by venture capitalist Aileen Lee, choosing the mythical animal to represent the statistical rarity of such successful ventures.

Airbnb and Uber were part of an early generation of tech start-ups that quickly reached $1 billion in value. The up-and-coming generation is looking very different.

All the early unicorns benefited from the spread of smartphones and cheap cloud computing. Many of these companies built global empires by simply taking existing businesses — like taxis, food delivery and hotels — and making them mobile. Some of the start-ups became giants: Uber, for instance, may reach a $120 billion valuation this year.

Now the easy opportunities for disrupting old-line industries are drying up. Now, many of the up-and-coming start-ups that may become the next unicorns have names like Benchling and Blend. And they largely focus on software for specific industries like farms, banks and life sciences companies.

Whilst most of the early unicorns were American, they have become increasingly global. China’s ByteDance for example is now the world’s largest unicorn, more valuable than Uber or Airbnb.

Sectors such as finance, or fintech to use the parlance, have exploded most rapidly, reflecting the need for disruption in a traditionally-minded industry. Brands like Clover in USA, N26 in Europe and Toss in Asia are reinventing how we use and manage money.

And regions such as Asia have seen the most intensive unicorn growth in recent times, most significantly in China.

Focusing on South Korea as an example of one of many fast growing markets, 6 startups have made it to the list of unicorns, new companies with a valuation of over US$1 billion, according to latest research by global analyst CB Insights.

They include Coupang, Bluehole, Yello Mobile, Woowa Brothers, L&P Cosmetics and Viva Republica.  Their combined value, at $23.58 billion, took up 2.2 percent of the 309 unicorns globally. 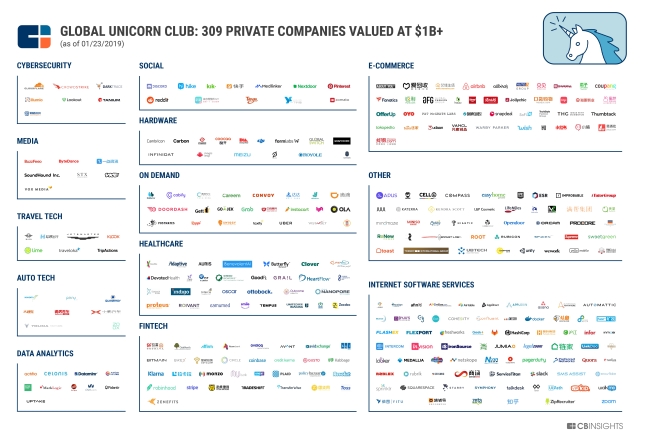 Among the six, Coupang was valued the highest at US$9 billion, followed by Bluehole’s US$5 billion and Yello Mobile at US$4 billion. Viva Republica was the lowest-valued Korean unicorn with US$1.2 billion valuation.

By the volume of total disclosed funding, Coupang topped the list with a combined US$3.84 billion, followed by Woowa Brothers’ US$457.80 million and Viva Republica’s US$242.10 million. L&P Cosmetics’ figure was not made public.

“Considering the size of South Korea’s economy, we could have at least one on-demand startup that has pan-Asia operations,” the head of the startup advocacy group said.

Lim also noted the local health care industry’s potential, given South Korea’s insurance system that allows affordable medical coverage, but regulations that restrict DNA testing and the use of medical data of individuals is deterring the growth of related startups.