Should Nike’s Vaporfly racing shoes be banned, or is this reasonable technologically-enabled human progress? 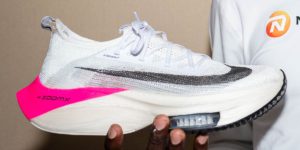 Nike’s record breaking Vaporfly Next% shoes have adorned the feet of multiple marathon winners since their release in 2017. But according to speculation, they seem likely to be banned when the World Athletics announces new rules surrounding running shoes.

The shoes, worn by Kenya’s Brigid Kosgei when she broke Paula Radcliffe’s women’s marathon record last year, are believed to make its wearers four per cent more efficient. They come with super-thick soles that incorporate carbon-fibre plates that act like springs, while remaining incredibly lightweight – a pair of UK size 9 comes in at 190g. Accordingly, rules that limit the thickness of midsoles and the use of carbon-fibre plates are expected soon.

A prototype version of the shoes – the Alphafly – was also used by Kenya’s Eliud Kipchoge when he become the first person to run a marathon in under two hours, albeit unofficially, in Vienna last October.

Performances such as this, along with many other record-breaking runs by those wearing the Vaporfly Next% shoes, has caused concern from non-Nike-sponsored athletes, as well as rival brands. The criticism levelled at the shoes is that it does not fall within the regulation of shoes being “available to all”.

While the expectation is that Kipchoge’s Alphafly shoes – which come with three carbon-fibre plates and an extremely thick midsole – will be banned, along with the modified Vaporfly Next% shoes worn by Kosgei, there may be a moratorium that allows records set in these shoes to stand.

With Kipchoge and Kosgei both due to race at the London Marathon in April, along with many other athletes who might ordinarily be wearing the shoes, the onus is on World Athletics to act quickly.

Nike, which aims to sell $50 billion worth of sportswear this year, capitalized in the 1980s on the controversy around Michael Jordan wearing red and black sneakers that violated the NBA’s “predominantly white” rules.

Nike put black censor bars over the sneakers in TV ads and later re-launched its Air Jordan 1 shoes in a “banned” edition. The brand went on to become a billion dollar business.