The Enlightened Capitalists … Purpose is rapidly becoming the new bottom line, demanding that business leaders and brands step up to stand out 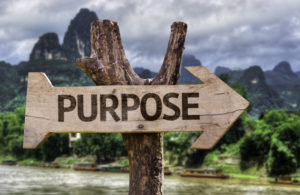 “Leading with Purpose in an Age Defined by It” is a great new report from Quartz Insights, and says that nearly 75% of surveyed business leaders agree that purpose is as important as financial performance.

Not so long ago, we had that vague, subsidiary concept of CSR. A kind of bolt on, a children’s playground to relieve our guilt, an addendum to the annual report. More recently we’ve seen a wave of purpose-washing. Nice statements, which were essentially the same as previous mission statements, claiming that the business has found itself.

Last year the Business Roundtable took a step closer, when they announced last year that all stakeholders mattered, not just shareholders. But it still felt like they were hedging their bets. Then in January Larry Fink, CEO of BlackRock, the world’s largest investment house, said that he would only continue investing in businesses if they could demonstrate purpose “beyond” profit. And the World Economic Forum added to all of that by declaring the end of shareholder value, and the primacy of purpose, and society.

I think Fink gets it best. The pursuit of shareholder value was never, actually the devil’s work. What it really meant, certainly in a long-term context, was that a business could create more economic value over time if it invested in all its stakeholders, to maximise their engagement and effectiveness. The net value created at the end was a measure of this collective effectiveness – a bigger cake, where everybody could have a bigger slice. Purpose is similar, although the final measure is not in economic value terms, but in the achievement of a bigger goal – that which is defined by the purpose, which might be to bring more joy to the world (Coca Cola), or to save our planet (Patagonia).

Genuine purpose should come from a company’s heart and soul: its people. It’s about your why – why you exist, why the world is better with you than not, why you come to work … It’s your distinctive passion. And it requires a shared passion, aligning organisation and individuals. For company leaders, this means engaging with employees on every level about the things that matter most to them, and using those values as the North Star that guides every decision you make—no matter the size.

The study also shows that 80% of business leaders agree that they have a moral obligation to engage on a social issue when it impacts their employees. For instance, Patagonia has many business decisions over the years (from stopping selling its most profitable item in its early days, metal pegs which mountaineers hammered into rocks, to helping customers to keep and mend their existing clothes, rather than buying new ones).

Practically this means acting with boldness, bravery, and conviction. Whether you’re a small business owner or the executive of a large company, here are four steps you can take to help your organisation chart its purpose and pivot into action.

The Quartz report shows that now, more than ever, the public expects brands to take a stand, and back up its values with meaningful action. It also shows that purpose can be a brand’s lifesaver, bolstering customer loyalty through good times and bad. Finally, and most important: it shows that brand purpose is a group commitment. It doesn’t swoop down from leadership or shareholders. It rises organically, and it lifts us all, to do better.

This Could Be Our Future: A Manifesto for a More Generous World, by Yancey Strickler

Businesses have sought to maximize profits for so long that it’s hard to imagine another reason for companies to exist. But Kickstarter founder Yancey Strickler makes the cogent argument that we can, and must, reprioritize if we want a stronger civil society than the one we have now—marked by crumbling infrastructure, the dominance of chain stores, and the rise of offshore tax havens. Strickler isn’t opposed to money, or even wealth. If businesses were optimized for the community or sustainability, he writes, “the rich would still be rich, just not as rich,” while the average worker and average citizen would be on more solid footing.

The Third Pillar: How Markets and the State Leave the Community Behind, by Raghuram Rajan

Shortlisted for the 2019 Financial Times and McKinsey Business Book of the Year award, The Third Pillar provides a detailed accounting of the imbalances in capitalistic societies. The FT calls it “a new departure into grand social history, which in its breadth often echoes big-picture theorists such as Barrington Moore and Francis Fukuyama and their attempts to tease apart the long-term tensions between capitalism and democracy.”

Changing the World Without Losing Your Mind: Leadership Lessons From Three Decades of Social Entrepreneurship by Alex Counts

By his early 30s, Grameen Foundation CEO Alex Counts had fulfilled his dream of becoming an accomplished nonprofit leader—and was, as he tells it, “unhealthy and unhappy to the core.” What he has learned about life and work in the two decades since is the subject of his gamely titled book, written for “a new generation of leaders dedicated to social change and environmental justice,” including those who are already jaded and those who are blissfully unaware of how easy it is, in the nonprofit world especially, to get that way.

The Enlightened Capitalists: Cautionary Tales of Business Pioneers Who Tried to Do Well by Doing Good, by James O’Toole

Is there hope for the virtuous corporation? Today, thanks to the leadership of Paul Polman, Unilever is closely associated with the conscious capitalism movement. But so was the company’s namesake, William Lever, the British soap magnate who was deeply concerned with his workers’ welfare at home (though considerably less so on his plantations in Africa). Lever eventually lost control of the business, and his more enlightened practices didn’t survive the transition—not an uncommon fate for founders of virtuous companies, as James O’Toole, professor emeritus at the University of Southern California’s Marshall School of Business, explains with vivid examples of historical and contemporary capitalists who tried to give back not through philanthropy but through their business practices.

The Optimist’s Telescope: Thinking Ahead in a Reckless Age by Bina Venkataraman

“Whenever I tried to convince business executives that they should prepare for droughts and heat waves, I armed myself with reliable projections of the future,” writes Bina Venkataraman, a former climate-change advisor to the Obama White House. “But corporate leaders … struggled to see themselves and their companies in the forecast scenarios.” It’s not just public companies that are driven by shortsightedness, though. Our inattention to long-term interests is a universal affliction, affecting our health, our relationships, and our environment. Venkataraman offers clear, engaging explanations of why we keep letting ourselves go off-track, and how even short-term incentives can be better designed to align with our long-term priorities.